CBs / FRS / GMRS / MARS, radios, stereos, computers, tools, etc. The stuff you use to support wheeling or use of your PW.
Post Reply
9 posts • Page 1 of 1

Sneak-peek in the PW Pic Thread last week. Closing in on completion of it, so ... here you go.

Original cupholders were kinda-busted when I bought the pickup (used). Not a huge deal, they worked fine folded-down but didn't align or latch reliably folded-up. I never folded them up. (USB drive for the stereo on the kickplate. Out of hte way, but also kind of inconvenient.)

Couple years of winter driving, site access in the summer... radio or two, phone, camera, battery charger(s), drinks bouncing around in there... something broke, and was rattling in the cupholder assy. Irritating rattle.

Pulled the cupholder assy out when I had the dash out to remove my old radio and install the new control head.

The idea... build a custom console, add a third cupholder, slot for a phone... integrate USB charger, inverter, and DC outlets into the design.

Swing by Home Depot for some MDF, and the arts-n-crafts store for some vinyl. Popped the ashtray dealie out, used that as a color reference... only color they had was one that matched the upper trim more than the taupe dash, but whatever, this'll work. There was 1yd left on the roll, which was enough for my needs... apparently if you buy the entire bolt (or what's left of it), it's half-off. Score.

Ordered a 3-pack of boat/rv/sofa/game-table cupholder inserts.
Measured out the width of the space the old cupholders left me, a little under 9" wide.
Measured out the space I had behind the dash, and how much I needed to still access the under-bench-seat cubby.
Buzzed out some MDF, laid out and knocked some holes for the new cupholders. They're bigger than I expected.

Template out some sides, then cut/glue/screw to the top.

Fits snug between the metal structure behind the old cupholder and the base of the bench seat (snug by design). Sits right against the t-case shifter. Should hold the bottom kickplate snug into the clips too (always had issues with that staying in).

Void some warranties. Inverter I've had for over a decade. Gut it, strip the switch/LEDs out and see how to wire that for "remote-control".

Switch/LEDs out to a D-sub with some 6cond jacketed cable.

Quick rig-up some LEDs and a switch, bench-test to make sure I didn't fork anything up. Unsurpringly, everything works.

Don't like using hot-snot to mount things, but ... there's enough surface area on here, and unless I want to take the side of the box off and modify the inverter again, i'm not left with many other options. I think it'll hold well enough.

Bust out some holes on the side for shallow-mount boxes, make sure the inverter works out to the outlet.

Hook up the two Powerpole connectors and get those wired in. One will be connected to continuous-power, other on the ignition-switched circuit. Most of my 12v equipment I've reterminated with APP's, so these outlets will eliminate the need for the cigarette-lighter-adapter. (Can you tell i'm a radio guy?

) These are also the same connectors we've outfitted the sled trailer with.

About half an hour in Solidworks and about two hours on the 3d printer... I have a nice inverter switch/LED plate.

After looking at that and the space my USB charger would need on the <9"-wide face, I reworked that plate to not include the text and shrunk it by about 3/4" width.
The USB chargers are one I designed a few years ago.
When we're out snowmobiling, we've got a lot of devices the all want a USB hole. Cameras, GoPros, radios, GPS's, tablets, phones... with two or three guys in the truck, those ports disappear real quick.
Designed a 30W charger and broke that out to one 2.1-amp high-current port and three 1-amp charge ports. Tablets or phones that want that high-current charge port can go there, and things like radios/cameras that don't need or can't use that power can go on the 1A ports. The PCBA is also stackable/chainable so it's real easy to build an 8-, 12-, 16-port charger. 30W can be passively-cooled, no fan or giant heatsinks necessary.

I've also fried a $200 GPS on a cheap chinese car charger... so the protection/quality-design is worth it to me&friends, when we've got a lot of expensive stuff plugged into it.

The 16-port is a beast... handy as hell. Have one installed on the toolbox in the shop of the 45ft trailer.
"Hey, do you have a place to charge my {phone|camera|tablet|radio} for a bit?" yeah, right in here..
"Oh wow this trailer's sweet, you guys did a good job on it." USB charger's right here. "Holy shitballs that's a lot of USB ports!!"

Couple hours in Solidworks last night.... export the PCB layout to DXF, bring the DXF into a sketch and model a 3D part out of it, download and assemble the important components on the model... then copy/modify the inverter switch plate to fit the USB charger.

and go-go-gadget-3d-printer! This build took about 6 hours. 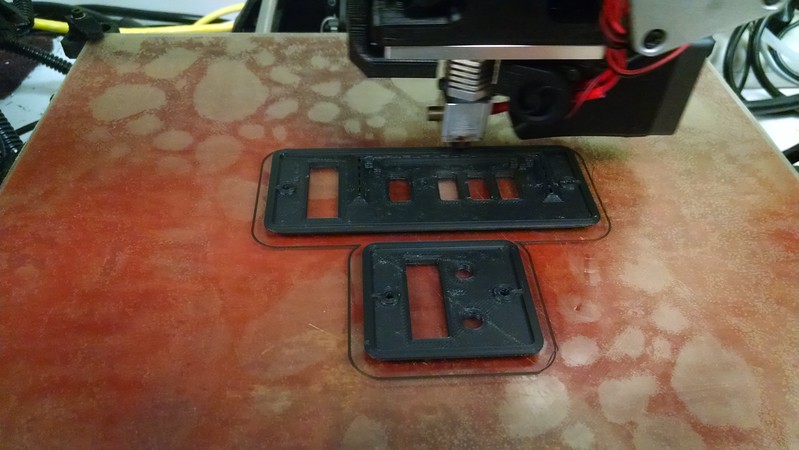 But in about 18 hours, this mounting plate went from an idea in my head to a thing on my desk.

Buzzed out some more holes for the new plates and the coupler for the stereo's USB drive... just about ready to wrap this thing up.

Everything fits, nice and tight, holes line up, no missed spots.

Wire everything up to a terminal block, secure all the wiring

Tapped into the "Cigar Lighter" circuit since it's 20A ignition-switched, and the "Power Outlet I/P" (whatever that means; "Power Outlet Console" is the one in the fold-down seat cubby) 20A continuous circuit.
It's not pretty, not my best work, but it'll work fine. Nobody's gonna see it.

Terminate with PowerPoles, slide a connector lock in there, and hook up the USB cable to the back of the coupler for the stereo.

Shove it in there.

Quick run to Home Depot to return the sheet of MDF and some other hardware I didn't need. No rattles, no smoke, no sparks.
I may 3d-print some inserts for the cupholders, the gatorade bottle doesn't fit in either the lower can-sized cup or the shelf for larger cups. Something to "fill in" the lower can-sized hole, or maybe a sleeve to reduce the diameter in the upper main-body.

And good job maintaining the panty hook. You'll need it once she sees the console.

Yea they're handy little bastards that's for sure.
Bought one (Makerbot X2) at work 5 or 6 years ago... sort of a "we kinda see the value in it, let's give it a shot" thing. That printer paid for itself in a couple months with the little shit we could model up in and hour and print off... assembly tooling, custom parts holders, test fixtures, etc.
Now we've got a pair of Lulzbot Taz's ... a higher-end machine, made locally (Loveland CO). Someone runs someting about once a week... not always work-related projects either (probably 50/50 split).

Kids toys, trinkets/keychains, game-pieces, rifle accessories, sled/moto/truck/trailer parts... Most of the parts on the machine is 3d printed, if one of those parts breaks we can just run off a replacement part on the other one.

Had a Stratasys on demo .... LOTS of consumables, and the pre- and post-build processes took just as long as the build did. Nice machine that didn't need a lot of tinkering/maintenance, but a part that takes 1hr to build on the Makerbot or Lulzbot would take about 4 hours on the Stratasys. I wasn't real impressed.

Makerbot was kind of a pos... when it worked, the prints came out okay.

The Lulzbots are pretty decent, especially with a good slicer (Simplify3D). Lots of neat features for internal and external supports/infill and options for layer profiles.

If I had that much time and effort in a custom console, I'd get it professionally upholstered. Otherwise very nice.
Top
Post Reply
9 posts • Page 1 of 1