If it's about Power Wagons, all generations, this is where it'll go. This is the original PWR Forum Power Wagon Technical Discussion Section. And this includes everything that doesn’t fit in any one of the other categories related to the truck goes here!
Post Reply
9 posts • Page 1 of 1

Maybe I'm just blind and can't see it. Less likely I think would be it got skipped when built. Anyone else with a 2014-2015 get the block heater option and willing to point me to the right spot?
I hadn't had a need for it yet but it just occurred to me I had never seen it and can't locate it using the instructions in the owner's manual.
2015 Tradesman (PW option), 37X12.50R17LT Cooper Discoverer STT Pro tires, AEV Katla 8.5" wheels
Top

I haven't used it on my 2012 6.7 since it has always started fine even at -15*F but I do remember reading on one of the cummins forums that the plug is not included. I'm not sure if it's the same on the gas engines but I would think it would be. You have to buy a cord that plugs into the block heater and route it to your front bumper.
Top

On my 2008, it is on the drivers side front, tucked in the metal framework behind the grill. Your grill does not go up with the hood. Mine does & makes it much easier to find. The plug end has a clip it is in, to hold it. I had to look hard to find it. It was too short to plug it in with the hood closed. As luck would have it, our microwave oven died around then & it had a HD cord & plug on it. I cut it off before recycling it & bought a female plug for the other end & used it as an extension, so i can plug it in without lifting the hood now.
I don't use it very often, but when i do, it is worth it's weight in gold.......kinda like our lockers & winch.
Top

adeluca73 wrote:I ordered it on my '14. It's zip tied inside the left tow hook compartment.

Mine is in the same place if by "left" you mean from the front of the truck. My 2015 has the plug by the passenger side tow hook.
John
Alaska
2015 PW on 2.5" Thuren Kings
My build thread
Top

Passenger front side behind the front bumper near the tow hook.

And in case you're interested, it draws about 600 watts 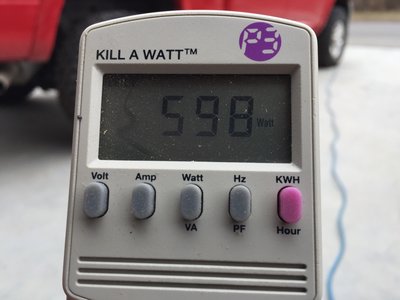