Start your thread and show everyone your build out.
Post Reply
233 posts

Rocking tires. Only had one flat and that was when I broke a wheel. I’ll be getting 37’s within a few weeks, either the new Yokohama MT’s or the Toyo RT’s.
Top

Everyone has nice things to say about the RTs better wet weather traction, longer treadlife and the same carcass as the MT while being between a MT and an AT all add up really nicely for my uses.
Top

Ok finally got all the PSC stuff hooked up! Just swapping in the PSC box was a little disappointing because it didn’t take any play out of my system and it turns a little slower than my previous box, but it does turn easier so I’m guessing that’s the difference with the bigger PSC piston. I got the assist cylinder installed this weekend using the factory axle hole drilled to 9/16” with an M14 bolt and some shock spacers, and welded the PSC tabs to the stock tie rod damper bracket for a single-shear mount. I had tried to use an M14 bolt there too but couldn’t get the distances right and then could not get a double-shear mount made with the bolt spring on the bracket so I just welded some love into it.

Hoooly crap, 100% this is the best steering setup I’ve ever felt on this truck. It is the quickest and most responsive, and strongest, and easiest turning all in one setup. Very light and fast steering on the street and freeway, and still self-centers just like stock. Easy turning but a touch slower when stopped or at a crawl.

I routed my hoses a little different, keeping them low and leaving slack just under the box. I had originally bent the 45 fitting more but I didn’t like having two 90’s at the box because of the layout so I switched the fittings and like how it turned out. One thing I’m not stoked about is how low the ram sits - I dropped the frame side of the trackbar to test travel and at full bump (when the shocks are bottomed) there is almost ZERO room between the cylinder and the trackbar bend, even when the cylinder is mounted as low as I can get it. CHECK YOUR CLEARANCES if you run a ram in the stock spot, just like a stabilizer. The hydro assist steering is 100% awesome. I love it. The combo of Thuren trackbar, Thuren drag link, stock tie rod, PSC gearbox and hydro assist is for sure the best steering setup I have ever felt in a Dodge. Every part in my front end is new and it’s awesome. Albeit I have like $3000 into my front axle

As punishment for my success one of my u-joints decided it was time to retire at the same exact time I was on my test drive, so now I have a pretty pronounced POP when changing directions sometimes, so now in addition to rebuilding my transfer case I’m also rebuilding my axle shafts and might as well do the driveshaft!
Top

Colibri wrote: ↑
Wed Mar 07, 2018 12:07 am
it’s kind of obscene price wise, but if you can swing it, rcv axles will make your truck turn smooth as glass. Especially in 4lo and even with the front locked.

If I knew I’d spend $3000 on just the front end I would have bought the best shit out there right off the bar. The font shafts in these trucks are very strong. I have hydro so I don’t need to worry with turning so much haha. Birfield joints are equally strong in all axes but it requires an increased load to propel them at a turned angle so they are technically right in their claims but in truth they still suffer similar weakness to u joints, but in a different and better fashion.
Top

Come down to Portland if you have time! They aren’t that close but it’s a lot better than getting to Texas. I’ll be jamming to get things out before I leave for Moab.
Top

Did something happen to your t-case that you have to rebuild it ? Or are you upgrading parts ? How many miles are on it ? Just curious.

I can grab the cardan joint and wobble it around, the bearings in the case must be toast. It’s got 80,000 miles on it, the previous case exploded when the driveshaft went haha. I also have a bad u joint on an axle shaft so I’m doing both front shafts and the front driveshaft while I’m at it.
Top

Colibri wrote: ↑
Wed Mar 07, 2018 12:07 am
it’s kind of obscene price wise, but if you can swing it, rcv axles will make your truck turn smooth as glass. Especially in 4lo and even with the front locked.

Agreed... Worth the money and piece of mind

This weekend turned into truck maintenance hell. I pulled the accessory drive, timing cover, oil pan (full of oil, I’m gonna give myself props for that!) and replaced the windage tray, timing chain/tensioner/guide, oil pump, and water pump. The fan clutch nut was installed by a gorilla! I ended up pulling the whole assembly and benching it and welding a piece of tubing to the pulley to get a 24” wrench on it to break it free! Removing the crank pulley/balancer and reinstalling it was a bitch. The special Chrysler puller tool I got didn’t reach deep enough to grab the flats on the backside of the pulley so I ended up sitting between the radiator and the pulley and used a die grinder to open up the necessary areas on the pulley. Then the spacers with the tool weren’t deep enough so I had to run the tool against the head of the bolt instead of bottomed in the bore. A regular three jaw puller might have worked perfect. Then reinstalling it, the install tool wouldn’t fit inside the bore so I ended up impacting the pulley on with the bolt that fastens it which worked great.

I primed the oil pump by removing the lower pipe plug on the oil filter housing and threading a barbed fitting in, and used an oil suction gun and hose to supply oil trough that fitting which feeds directly to the pump and

I noticed quite a bit of corrosion pitting along the path of the seal of the water pump on the timing cover but everything else was immaculate.

After I finished at 6am on the third day my brand new water pump temp sensor would not read temp and my old one that broke during removal of the fan clutch did work. Then after a while the old one stopped working and then the new one worked again....

The biggest point of all of this was to replace the oil pump because I had symptoms of low oil pressure after running the truck hard Offroad, and the symptoms pointed towards a bad pressure regulator in the pump. I also wanted to change the timing change since I was in there. The old timing chain showed zero wear or stretch and the flimsy tensioner/guide were both in great shape for 180,000 miles! Upon startup the oil pressure went right back to where it always does as a low 36psi

I pulled the oil pressure sending unit and played with it with a pin inside and found that the sensor would reset based on where you pushed the pin and would then react around that baseline, so it went from pressure around 36psi to pressure around 72psi to pressure around 61psi, while showing 22psi with the engine off... so the sensor is toast though I would never expect to se signs like that because usually on a sensor of that type of it hangs up on a wear ridge it will always bottom at a certain number and will go up to the true value as it leaves the ridge.

Otherwise she runs great, cylinder wear is ok with a lot of the crosshatch missing but the cylinders are definitely not polished, and the camshaft shows very little wear. Briefly started on the transfer case rebuild. Pulled the front driveshaft and started pulling the transfer case. Whoever put the transfer case hardware and transmission crossmember in the same place is an asshole. I don’t think the one lowest bolt on the case can be removed without dropping the whole crossmember, while everything else can. Otherwise it looks really straightforward to remove the case.

Rebuild kit looks all good, for being only $75 on Amazon it’s got SKF bearings and all new seals. I did buy a new rear output shaft bushing to hold the driveshaft but it’s a steel bushing so I see why it wasn’t included in the kit.
Top

It’s been a while since I’ve updated this! So many changes! I’ll start with the imminent changes at hand:

I’ve been working with Chrysler on a new product to retrofit the 5.7’s to gain comparable reliability to the 6.4’s. I’m goin got call this a resounding success! I have one kit in stock if anyone needs! 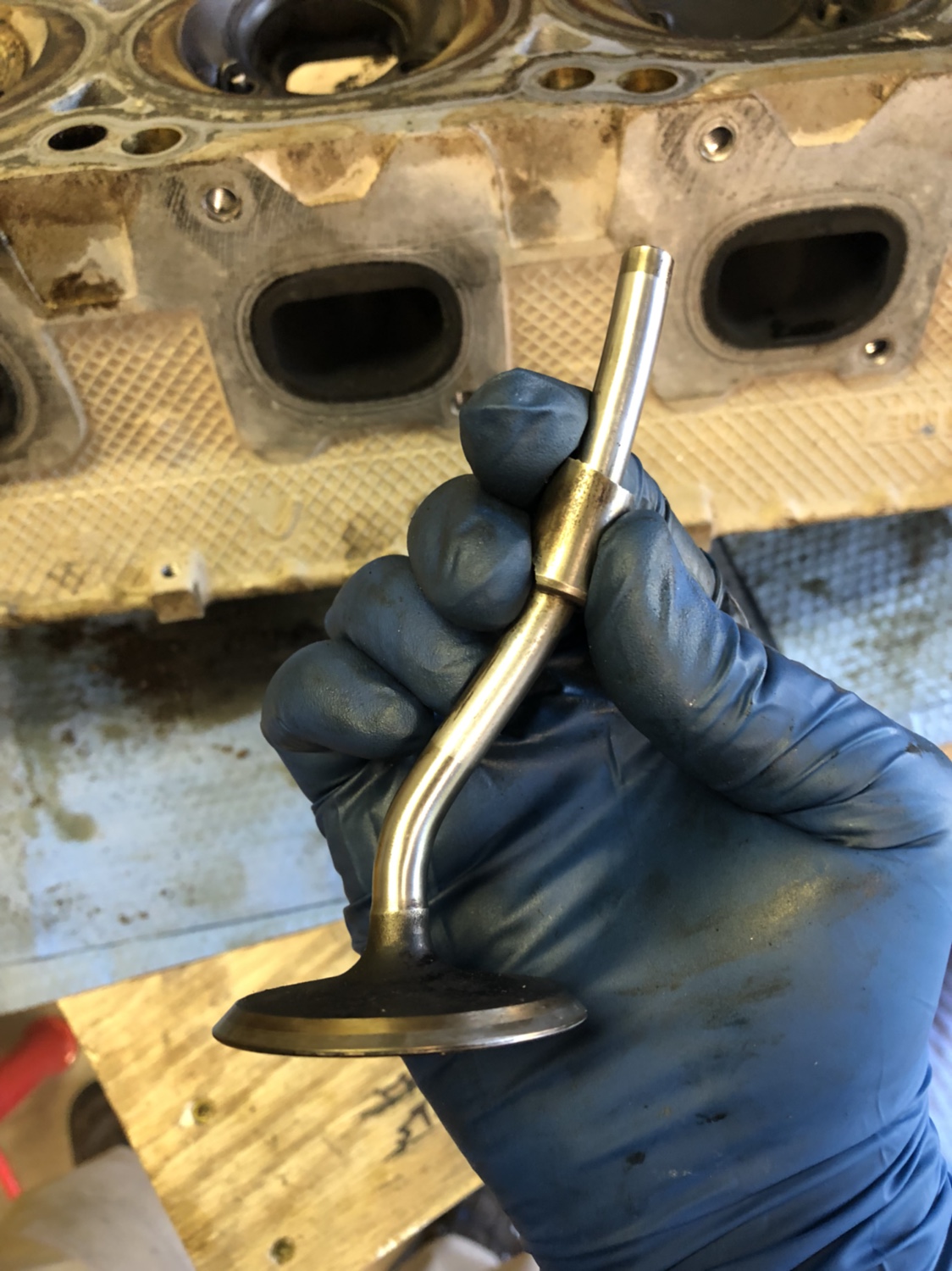 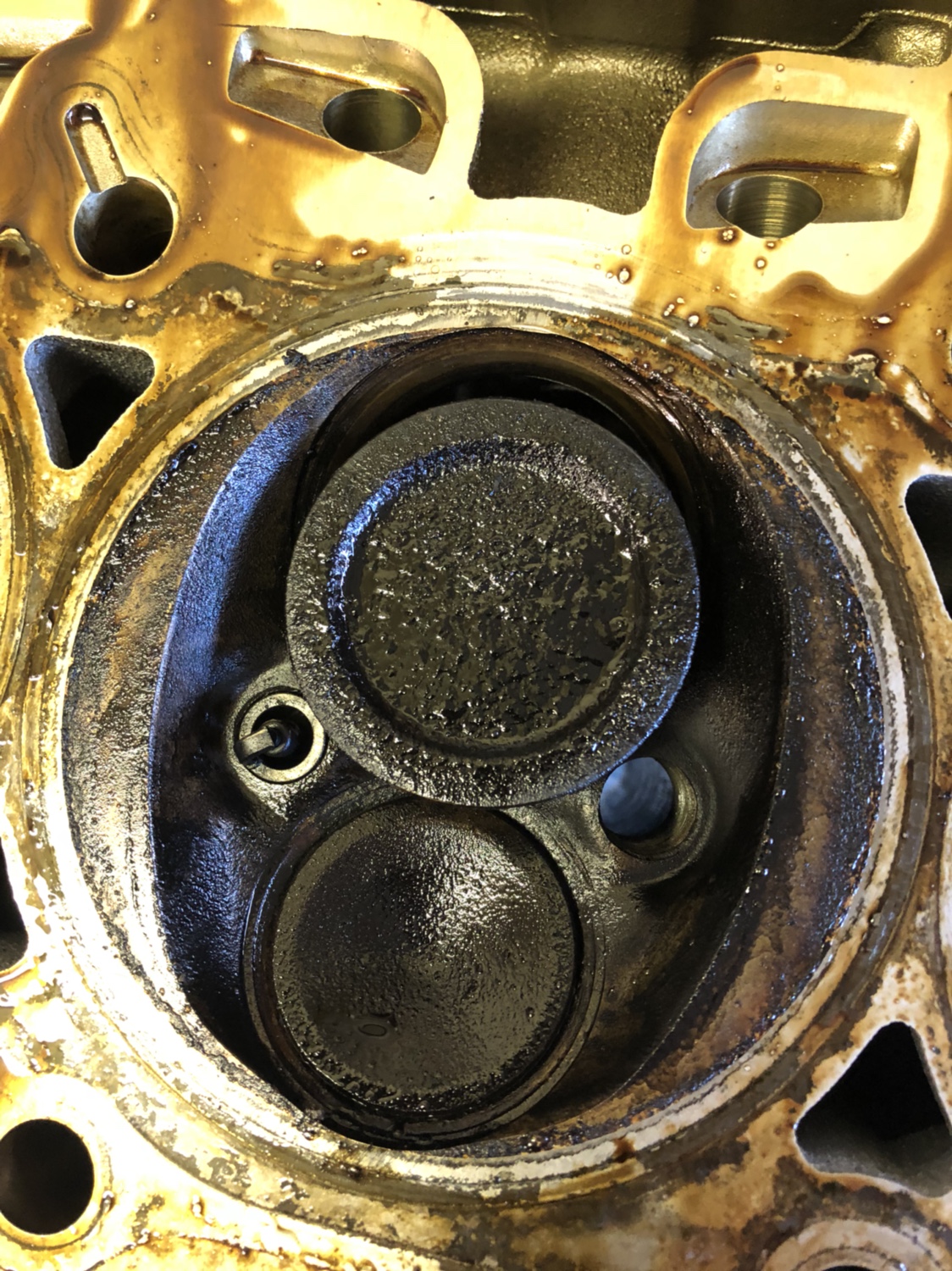 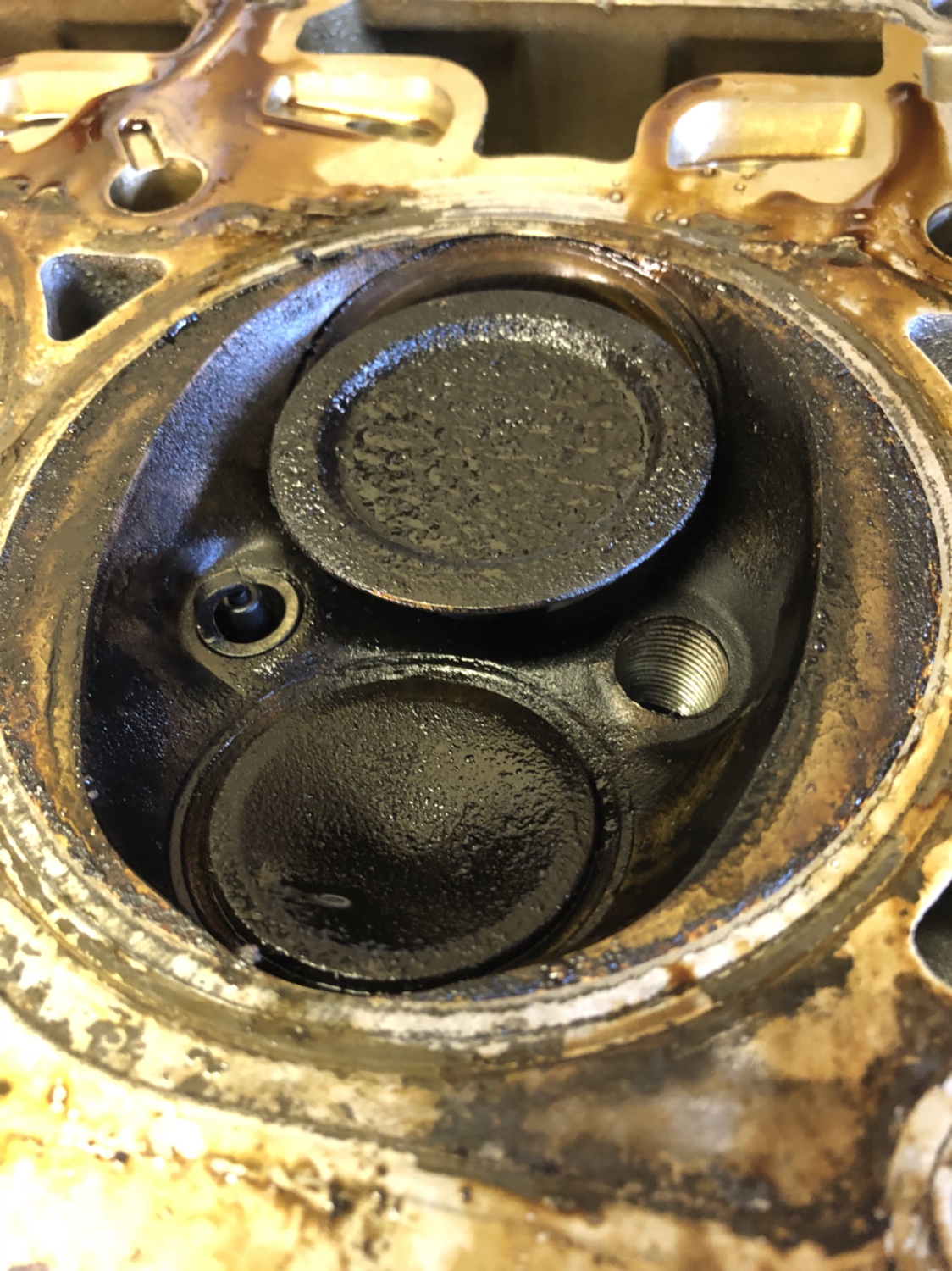 Is that from the new super high flow heads?

RustyPW wrote:Is that from the new super high flow heads?

What does the top of the piston look like?

Yeah dude more power if you leave one valve open a little! 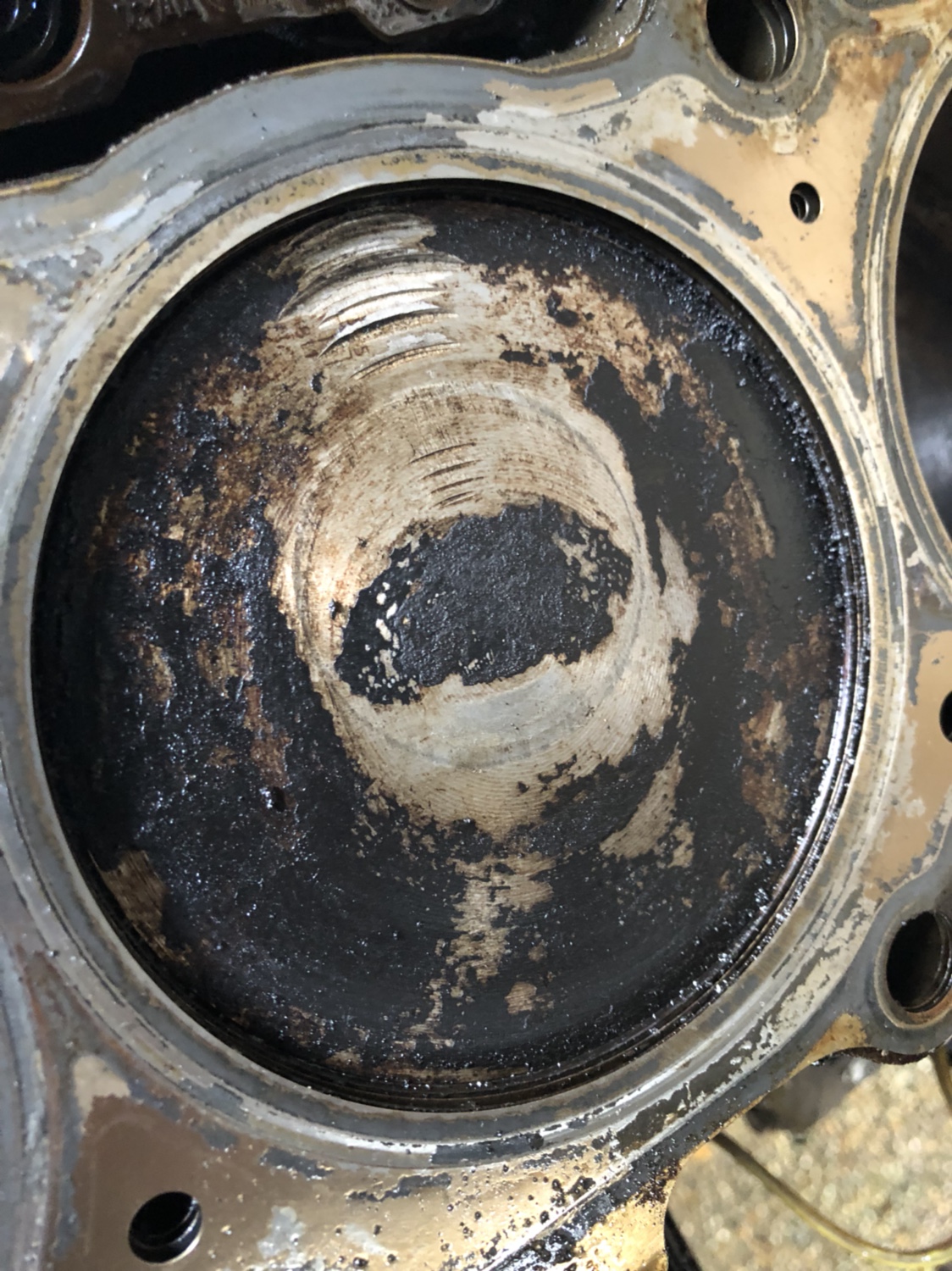 Plan right now is to not replace any pistons. The contact was very minimal and I think just smoothing down the surface will be enough. I’ll check out the edge of it and see how it looks by the cylinder wall.

So far it’s looking like one valve, guide, seal, spring, retainer and pushrod is it. The lifter and cam seem good.

I’m going to see what I can do for a valve compressing tool. Anyone know if a standard compressor works? It sounds like the Hemis need a special tool? I’m thinking I’ll replace all valve springs while I’m in there so this doesn’t happen again.
Top
Post Reply
233 posts